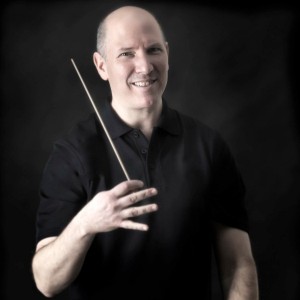 Visit Jed on the Web

Orchestra members throughout the world, soloists, and opera singers often recount how Jed Gaylin’s rehearsals and performances elicit their very best, not only individually but collectively. He seeks connections not only within a piece, but also between seemingly disparate and wide-ranging works to sculpt a concert of surprising, captivating juxtapositions. His dedication to exploring the music’s fullest potential in a collaborative spirit reaches beyond the stage to draw the audience into the creative act. Listeners feel far more than just welcomed by words from the podium—they feel engaged as participants in a wordless musical conversation that is spontaneous, big-hearted, and eloquent.

As Music Director, Jed Gaylin leads the Bay Atlantic Symphony, Hopkins Symphony Orchestra, and Two Rivers Chamber Orchestra with the same creative depth and an open spirit that he brings to the podium. The Bay Atlantic Symphony is now not only consistently praised for its astonishing level of artistry and precision, it is also viewed throughout New Jersey as a model for how professional orchestras can become a vital focus and source of identity in their communities. As a sought-after creative partner throughout the region, the Bay Atlantic Symphony has forged residencies with three area colleges, numerous towns, music festivals, and even casinos.  Atlantic City’s Borgata has hosted the Symphony for an all-classical summer series, begun in 2013.  In 2012, Jed Gaylin was named Artist in Residence at Stockton University. This position is a part of an innovative model in which Bay Atlantic Symphony is integrated into the music curriculum. Symphonic rehearsals and presentations have become focal points for coursework and seminars. Also in 2012, he was named Music Director of the Two Rivers Chamber Orchestra, in Shepherdstown, West Virginia.

In 2018, Mr. Gaylin was tapped by Eastman School of Music composer Carlos Sanchez-Gutierrez to conduct his Alla Balena Ensemble, a group of virtuosi from throughout the US. ABE has performed at Eastman’s Kilbourn Hall, The Mexican Cultural Institute (Washington, CD), and Teatro Degollado in Guadalajara. Mr. Gaylin has commissioned and performed numerous works by Sanchez-Gutierrez for more than 30 years.

Mr. Gaylin makes his home in Baltimore where he lives with his wife, poet and essayist Lia Purpura. He has been Music Director of Hopkins Symphony since 1993 during which the orchestra has grown in size, prominence, and artistry into one of the country’s most accomplished university orchestras. The high standards of the orchestra and Jed Gaylin’s belief in art’s ability to knit together and ignite new energy in our communities have resulted in collaborations with arts groups throughout the city, as well as with other non-profit and civic organizations. Also in Baltimore, Jed Gaylin was a regular conductor of Opera Vivente, where his interpretations of Mozart, Verdi, Donizetti, and Jonathan Dove were regularly praised for their nuance and power.

Early in his career, Jed Gaylin was awarded the prestigious Presser Music Award to conduct in Russia, and a National Endowment for the Arts award to conduct in Mexico. Since then he has forged close relationships with musicians throughout the world and relishes making music in different countries. He is consistently invited for return engagements, as audiences and orchestras are drawn to both his artistic and human qualities.

Such soloists as Hilary Hahn, Yuja Wang, Eugenia Zukerman, Shai Wosner, and Stefan Jackiw have performed with Jed Gaylin leading the Bay-Atlantic and Hopkins Symphonies. Composers he has commissioned include Carlos Sanchez-Gutierrez, Lee Pui Ming, James Grant, Russell Steinberg, and James Lee. He recorded She Comes to Shore—concerto for improvised piano and orchestra, by pianist/composer Lee Pui Ming (Naxos/Innova). The recording features the Bay-Atlantic Symphony, with the composer at the piano. He also conducted for a two-album CD played by the Xinjiang Philharmonic in Northwest China. Highlighted are composers and indigenous instruments from Xinjiang and Shanghai.

Among Jed Gaylin’s television and radio broadcasts have been National Public Radio’s Weekend Edition airing of the Bay Atlantic Symphony to more than four million listeners, Voice of America presentations throughout Europe and the former Soviet Union, as well as Bucharest Radio Orchestra, and the National Radio and Film Philharmonic in Beijing. Mr. Gaylin and the Bay Atlantic Symphony broadcasted a full-length concert performed at the Cape May Music Festival on WWFM in New Jersey and have been aired repeatedly on WYPR in Baltimore.

Jed Gaylin makes music with spirit and intellect, soul and rigor, a deep knowledge of world cultures, human nature, and the arts—that is, with his whole being. His approach to music, musicians, and life-lived-large, is rare: an old world commitment to study and depth of conception, combined with a welcoming presence and warm engagement—both on and off the podium.